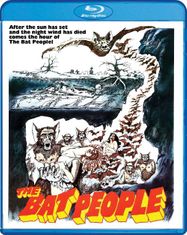 From director Jerry Jameson (Airport '77, Raise The Titanic) comes a high-flying horror from the darkest corner of the drive-in: The Bat People!

When Dr. John Beck and his wife Cathy fall into an underground cave, a huge bat attacks them, biting the good doctor. Thinking it's only a scratch, Beck avoids treatment, and soon wakes to find himself transformed into a horrifying man-bat creature! Now one with the night, Beck embarks on a killing spree to conceal what he's become, and he won't stop until he once again has the one thing his new existence is missing ... his beautiful wife! This monster chiller stars real-life couple, Stewart Moss and Marianne McAndrew!