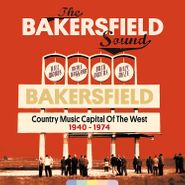 The Bakersfield Sound: Country Music Capital Of The West 1940-1974 is 10 CD box set that tells the story of how a country music cottage industry transformed Bakersfield and became a serious challenge to Nashville's commercial country dominance. This first sprawling multi-disc anthology begins with 1940s field recordings of migrants who fled the ravages of dust and economic depression in search of a better life in California. It traces the development of the music they brought with them all the way through 1974, the last full year Merle Haggard made his home in Bakersfield, the year of Buck Owens' final Top 10 hit as a solo artist, and the year Bakersfield guitar hero Don Rich was killed in a motorcycle accident. This collection also features a large number of previously unreleased studio and live recordings, radio recordings, and demos, plus a full-color illustrated 224-page hardcover book with a plethora of photos, many shown here for the first time, and track-by-track commentary.