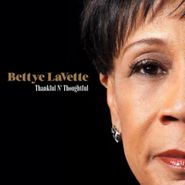 On the opening track of her new album, Bettye Lavette sings on Bob Dylan’s “Everything is Broken” of so many things broken and messed up and offers such little reprieve — “ain’t no use jiving, ain’t no use in jokin’, look around you, everything is broken,” she sings — that it would be the ultimate in defeatism if not for the ferocious growl with which Lavette sings “eevvvverything is broken.” Clearly, this is not a woman who is broken easily, after achieving only moderate success for decades since the ’60s before breaking through with 2005’s female-artist cover album I’ve Got My Own Hell to Raise. On this new covers album, she takes on The Black Keys, Ewan MacColl, Tom Waits, Neil Young and a score of others who have helped popularize the blues over the past century. Lavette’s jagged voice helps unify the tracks into the context of their blues roots, while her crack band do their best to set her up and get out of her way. “You don’t have the blues like me” she intones on Chris Youlden’s “I’m Tired.” You’ll be inclined to agree.