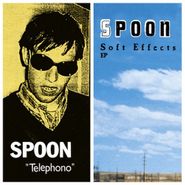 Spoon's debut album Telephono and follow-up EP Soft Effects have been reissued together ten years after the former's release and it's a pleasant revisit to the band's early, more raucous indie rock, alive with strains of Pavement, Wire, and even The Replacements. Telephono is a solid, well-written rock n' roll album that holds up well today, with the gut punch of "Not Turning Off" and the edgy "Don't Buy The Realistic." On the equally strong Soft Effects, you can hear the band's movement toward its current distinctively angular sound, especially on tracks like "Mountain To Sound," as well as some pop hooks like in "Waiting For The Kid To Come Out."