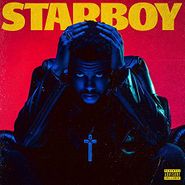 The Weeknd's Starboy represents a further evolution in the alternative R&B singer/producer's sound. Featuring guest appearances from Daft Punk, Kendrick Lamar, Lana Del Rey, and Future, the album is brighter, splashier, and more polished than his early, ultra underground mixtapes. Fortunately, it works and that's due to Mr. The Weeknd himself, Abel Tesfaye's impressive ability to merge pop culture into his own dark vision. Want to know what an album inspired equally by The Smiths, Prince, Bad Brains, DeBarge, David Lynch, and David Cronenberg sounds like? Take a listen to The Weeknd's latest LP of artfully produced dystopian afterparty jams.