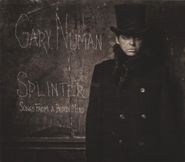 Between his work with Tubeway Army and his own monumental solo career, Gary Numan has nothing to prove. One of the founding fathers of the popular synthesizer as it might appear in both new wave and dance music, Numan's sci-fi anxiety set a template that still feels relevant in music today. On his latest album, his 20th, Numan appears in a theatrically dour mood, using equal parts synthesizer and huge crushing guitar to communicate a sound which incorporates the Smashing Pumpkins work on Adore and a more chugga-chugga version of early 2000s NIN. Numan's voice is remarkably unchanged and slithers and sings just like he was still on the verge of deducing the pleasure principle, albeit with a darker, less robotic edge, wavering with eastern melodies over grandiose string arrangements. A massive semi-goth affair which should please Numan fans young and old while certainly attracting some new ones.