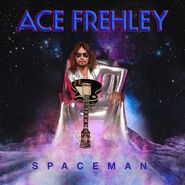 Ace Frehley shows no signs of slowing down at 67, with his third solo album of straightforward F-off rock n' roll. Several tracks were co-written with Gene Simmons, and most of them boast enough still-blistering guitar solos to satisfy the Kiss fans. “Your Wish Is My Command” is a clear highlight with its cruising, feel-good chorus, as well as the faster-paced rocker “Bronx Boy.” Instrumental closer “Quantum Flux” goes against the grain, delving into prog-rock territory and adding a little extra texture.