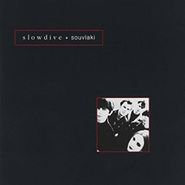 I like to think of my life as pre and post Slowdive. There are just some of those albums that change your life forever. This is one of those albums for me. My Bloody Valentine did it a couple of years before. But this is the band that did it for me in 1993. As much as I loved Blur, Suede & The Verve. I probably listened to Souvlaki more than all those albums combined. This album was released in the UK on Creation in June of 1993. It was not released in the US on SBK until early 1994. The artwork was changed on this album cover for the US release. They made the image a really small little image on a mostly black cover. Not really sure why they changed it. But they did add some bonus tracks for the domestic release. Souvlaki included "Alison," "Sing," "Machine Gun," "When The Sun Hits" & "Dagger." This album is a shoegaze classic. If you have heard this album then it is mostly likely one of your favorites. The album was the perfect end of the night album. I listened to this album almost every night before I went to sleep for probably about a year or so. Slowdive had released Just For A Day in 1991. SBK released it in 1992 in the US. But I had never heard of this band until a friend introduced them to me in 1993. So I always think of Just For A Day as their second album since it was the second for me. Just For A Day is a perfect companion album to Souvlaki. Just as good and magical. They went on to release Pygmalion two years later in 1995. It just doesn't get much better than Slowdive. There is really nobody like them. Many bands who try recapture that amazing sound of those first two Slowdive albums. But it simply could not be done.