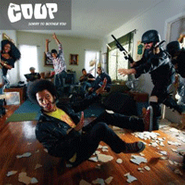 Boots Riley resurrects The Coup as a full-band after a 6-year hiatus to drop the rare "record of our times." Funky, fierce, funny, heart-wrenching and inspirational.

The Oakland group's sixth album finds the group very much alive after six years of silence, perhaps reenergized by their involvement in the Occupy movement. The always-political but never unfun group’s latest is almost cartoonishly bright, full of swinging live beats, cheerleader-esque chants, kazoos and other fun to ease their political-leaning messages. Tracks like “The Magic Clap” and “Strange Arithmetic,” which sound grafted from bits of Adult Swim and The Nation. Sorry to Bother You sounds like the party record of the election, with the message seeming to be, everything right now is as screwed up as a bad trip.