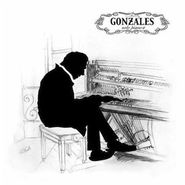 Gonzales is a brilliantly versatile musician. From these piano com-positions to Feist to hip-hop tracks for Drake, this man is pushing things forward. I caught a live show of his tour for Solo Piano II, and it was easily one of the best performances I have ever experienced.

Chilly Gonzales is tall, dark, and handsome Canadian piano virtuoso Jason Beck, who plays a minor-key mix of tunes that incorporate elements of everything from classical to hip-hop. His best-known tune is "Never Stop," which became a worldwide anthem when it was used by Apple in the original iPad commercials. Onstage he dons bathrobe and crocheted slippers, and makes outrageous pronouncements before and during his percussive, darkly catchy piano ditties. Solo Piano II was recorded in Paris' Studio Pigalle, and it's another delightfully cheeky set of plonky anthems, classic in origin but quite modern in style. Let your inner aristocrat out to play on a chilly day!