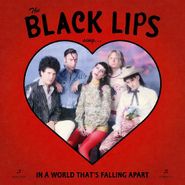 Once again, the Black Lips have breathed new life into a tired genre on their wonderfully named new record, Sing In A World That's Falling Apart. It’s a little bit…country?! Naturally, it’s more than a little bit rock ’n’ roll. The band fuses the two seemingly disparate genres effortlessly into a steamroller of an album that’ll take down anything standing in its way. This is the rough-and-tumble Atlanta band at their most entertaining and irreverent, all served up with a heavier than usual Southern twang. Sing In A World That's Falling Apart is rowdy, raw, and ready to rock.