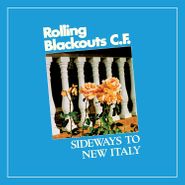 Australian five-piece guitar pop outfit Rolling Blackouts Coastal Fever returned home after relentless touring for their second album, Sideways to New Italy, in which they explore their individual pasts and the places that inform them. New Italy is a village near New South Wales’s Northern Rivers and also where drummer Marcel Tussie is from. A place with fewer than 200 residents, it was founded by Venetian immigrants in the late-1800s and is a living monument to Italians’ contribution to Australia, with replica Roman statues dotted across the rural landscape. The parallel between these relics of home and the band’s own attempts to maintain connections during their disorienting time on the road became the thematic inspiration of this album. The notion of crafting a home away from home grounds the album in sensitive yet catchy rock songs of personal history that will stay with you no matter where you roam.