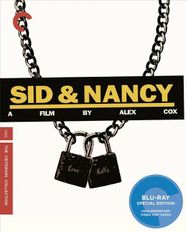 In the lacerating love story Sid & Nancy, Alex Cox reimagines the crash-and-burn affair between punk’s most notorious self-destructive poster children: Sex Pistols bassist Sid Vicious and his girlfriend, Nancy Spungen—brought to visceral life by brilliant performances from Gary Oldman and Chloe Webb. Cox turns his anarchic filmmaking style on the explosive energy of the London punk scene and the degenerate streets of seventies New York, making for an eviscerating depiction of excess and addiction. Through the lens of cinematographer Roger Deakins, the imagery goes from swooning to grimy, and the film’s bleakness is balanced with surreal humor and genuine tenderness, making for an affecting, music-fueled vision of doomed love.