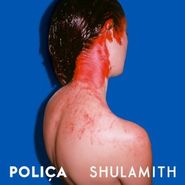 Polica seemed to come out of nowhere in 2012 with a great debut album, Give You the Ghost, which propelled the group from unknowns to indie faves. In reality the group has roots in the long-running Minneapolis-based band/collective known as Gayngs, thus their sleek first offering. Shulamith further hones the band's driving synth-rock sound without giving up their cred. "Chain My Name" is a song The Killers might write if they had an ounce of the cool Polica has, a hedonistic party jam shrouded in lo-fi effect. Singer Channy Leaneagh comes out of the shadows a bit on "Smug," though her R&B-flavored vocals are manipulated till she's just out of reach; the result is akin to a friendlier Fever Ray. The band even enlists Bon Iver's Justin Vernon for a sexy, underwater duet, "Tiff." Polica still clearly have one foot in the underground on Shulamith, but lurking under their dark noise are boldfaced hooks dying to get in your head. Let them in with Shulamith.