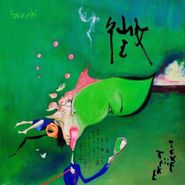 TEKE::TEKE's combination of thunderous surf-rock with Japanese psychedelic film music is thrilling right from the get-go. A collaboration of musicians from different Montreal projects, the group has released Shirushi, their second album as a tribute act for Japanese guitarist Takeshi "Terry" Terauchi which has now morphed into a band. Dynamic tracks like "Yoru Ni" sound like they'd be a blast live. With Japanese flute and harp combined with slamming guitar, horns and drums, led by strong vocals from Maya Kuroki, "Barbara" and "Meikyu" are also welcome earworms.