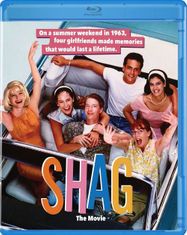 This warm-hearted romantic comedy stars Phoebe Cates (Fast Times at Ridgemont High) and Bridget Fonda (The Godfather: Part III) as young girls on the loose in Myrtle Beach circa 1963.

Carson McBride (Cates), who’s counting down the days until her wedding, and Melaina Buller (Fonda), the capricious daughter of a preacher, will sneak away from home along with friends Caroline Carmichael (Annabeth Gish, Mystic Pizza) and Luanne Clatterbuck (Page Hannah, Gremlins 2: The New Batch) for big time fun and “shag” dancing on the south coast. Through romantic entanglements, broken hearts and some of life’s hard truths, these friends are in it for the long haul. Film critic Roger Ebert had this to say about Shag: “It has a charm based on its innocence, its conviction … the actors in Shag are some of the best of the younger generation in Hollywood, and they treat their material with the humor and delicacy it deserves.”