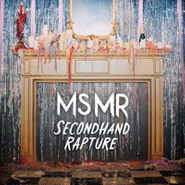 Millennial pop duo MS MR take a path forged by many, but they’re doing it with nuance. Their debut album, Secondhand Rapture, should please fans of left-of-center pop like Ellie Goulding, Florence and the Machine and Niki & The Dove, but the level of detail and restraint to their songs puts them on a different level. Songs like “Ash Tree Lane” feature Lizzy Plapinger’s sultry vocals while Max Hershenow fleshes out the songs with synthesized sounds, layering piano, horns and strings. On the band’s singles, like “Hurricane,” which was cool enough to get a remix from electropop band CHVRCHES, Plapinger doles out both hooks and soulfulness, something the genre isn’t terribly known for. “I never saw what you saw in me,” she sings in the loner pop anthem, and she puts you right into the eye of her internal storm. They’re great when they go a little more overtly goth on single “Bones,” singing about “empty churches with soulless curses” over a menacing, rumbling beat. As well, when they hue closer to the pop end of things, on songs like the sparkling, dancier “Fantasy,” or cross into radio-friendly pop like “Head is Not My Home” and “Salty Sweet,” they make you wish Britney Spears would hire these guys to write her next comeback album. For unabashed pop loaded with smarts, look no further.