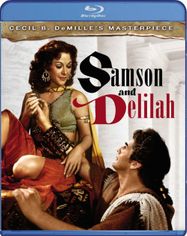 Journey through time to a gloriously extravagant setting of lust, violence, and treachery in this meticulously restored Oscar®-winning masterpiece from legendary filmmaker Cecil B. DeMille. Starring Hedy Lamarr and Victor Mature in the title roles, Samson And Delilah follows the story of the Bible's legendary strongman and the woman who seduces, then betrays him. Also featuring a young Angela Lansbury in one of her early film roles and eye-popping costumes from acclaimed designer Edith Head, Samson And Delilah was an instant classic that remains an enduring favorite.