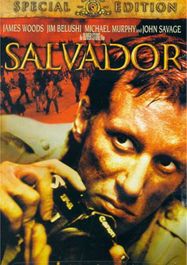 Nominated for two Oscars®, this "gripping" (Newsweek), semi-biographical account of photojournalist Richard Boyle's tumultuous experiences in war-torn El Salvador "has a power you can feel" (The Hollywood Reporter)! James Woods gives his "fullest, most humane, most emotional performance" (New York Magazine) to date in this "gritty, harrowing and bold thriller" (Gannett Newspapers).

It's 1980. Young men, women and children are being brutally killed in a bloody civil war in El Salvador. It's a horrific setting... but a perfect one for Richard Boyle, a sleazy war photojournalist whose career needs a jumpstart. Armed with his camera, Boyle joins the front lines in an attempt to capture atrocious-but-valuable images of the pain and horror. But with each picture he takes, he catches a tragic side of humanity that ignites his long-buried compassion. And he unexpectedly discovers something that will change him forever: his soul.