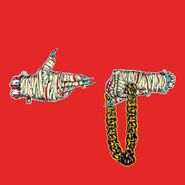 Run The Jewels, the super talented hip-hop power duo of El-P and Killer Mike, outdid themselves in 2014 with their anticipated follow up to last year's excellent self-titled debut on Fool's Gold. For the all killer no filler sequel, released via Nas' newly launched Mass Appeal Records and simply entitled RTJ2 or Run The Jewels 2, they turn up the sonic and lyrical assault with an in your face album that is as much rock as it is hip-hop and, while only eleven songs deep, it satisfies on every level, leaving listeners longing for more. If only for the pitch-perfect second single and best song on the album "Oh My Darling Don’t Cry," this album would be worth buying but everything on here kicks ass. As E-Lit at Amoeba Berkeley noted, Run The Jewels is better than anything either El-P or Killer Mike have done individually up to this point in their respective careers - and they've each done some amazing work! RTJ2's select featured guests include Zack de la Rocha, Travis Barker, Diane Coffee, and BOOTS.