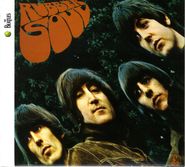 Rubber Soul was the album in which The Beatles transitioned from teen idols to true musical artists. Though most of their previous full-lengths (especially the UK editions) offer plenty of great tunes, Rubber Soul is their first great LP from start to finish. It also finds the band moving away from the simpler ideas of their earlier material. Just one year prior, a song called "Norwegian Wood (This Bird Has Flown)" would have seemed totally bizarre. Here, it fits right in with other mellow, acoustic-leaning, wistful tunes, like "Michelle" and "Girl," and especially the more reflective "Nowhere Man" and "In My Life." The Beatles still offer plenty of great, upbeat pop songs, too. Groovy opener "Drive My Car" has a terrific build, early hippie ditty "The Word" is as addictive as any of Rubber Soul's hit singles, and the uncharacteristically menacing "Run for Your Life" moves along to quick-chugging beat. Of course, The Beatles' artistic prowess would continue to grow over their next few albums. Still, Rubber Soul is the perfect midpoint in the group's evolution. The band were no longer innocent, but not yet jaded. This great album marks a sweet spot in The Beatles discography.

Rubber Soul is a benchmark album in the Beatles catalog. It marks the end of their early career, as it would be their last album to be supported by a live tour and marks the beginning of their run as the most original and talented recording band in the world. From the punchy bass and layered percussion on the rock and soul opener "Drive My Car" through to the spacey high harmonies and funky guitar interplay on closer "Run For Your Life," Rubber Soul is ear candy. Each song has a dynamic individual sound. Producer George Martin does a magical job blending so many instruments and influences into a cohesive whole, but it's the creative energy and drive of the band that make it all possible. The maudlin air of "Michelle" somehow fits perfectly next to "What Goes On" and its chicken scratch romp. "Norwegian Wood" with its hypnotic Indian influence sounds only natural on an album featuring the Greek folk revival of "Girl." The thoughtful "Nowhere Man" and "The Word" with its shout out to LOVE, sound personal and universal at the same time. My two favorites are John's sad/sweet "In My Life" with its invocation of things past and George's distorted guitar driven "If I Needed Someone" which hints at the future of psychedelic music. Another classic by a band growing daily.