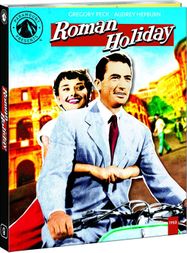 Audrey Hepburn won a Best Actress Academy Award for her role as Ann, a beautiful princess on a European publicity tour. During a stop in Rome, Ann sneaks away from her embassy, determined to see the Eternal City on her own terms. A hard-bitten newspaperman (Gregory Peck), hiding the fact that he's a reporter, spends the day with her in an effort to get a scoop, but finds himself falling for the young royal. Director William Wyler's charming romantic comedy also stars Eddie Albert. 118 min. Widescreen; Soundtracks: English Dolby Digital mono, French Dolby Digital mono; Subtitles: English; featurettes; photo gallery; theatrical trailers. Includes special collectible packaging.