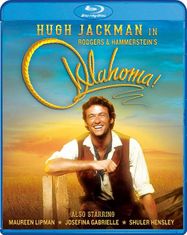 Set in the early 20th century, Oklahoma centers on singing cowboy Curly McLain who tries to woo and win the heart of his childhood friend, Laurey Williams.

The show debuted on Broadway in 1943 and was later adapted for the 1955 Academy Award®-winning film.

A Rodgers & Hammerstein classic, the musical features a slate of songs that have become part of the American songbook, like "Oklahoma!," "Surrey With A Fringe On Top," "Oh, What A Beautiful Morning," "People Will Say We’re In Love" and others. The writers received a special Pulitzer Prize for this work in 1944.