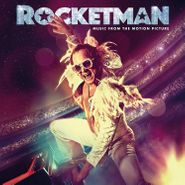 The multi-talented Taron Egerton who portrayed Elton John in Rocketman duets with the artist himself on the foot-stomping new tune, “(I'm Gonna) Love Me Again,” on the film's soundtrack. But the classic songs Egerton makes his own, guided by producer Giles Martin and given full freedom by John. With multiple cast members singing parts on certain tracks, edgier songs like “I Want Love” take on a different feel and lean more towards Broadway numbers. Egerton's voice is naturally smoother than the legendary artist's, but he works at bringing on the grit and captures the emotion.