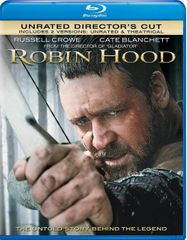 Academy Award® winner Russell Crowe and visionary director Ridley Scott (Gladiator) reunite for the untold story of the man behind the legend. In an age of oppression and shameless tyranny, an outlaw becomes the unlikely hero that saves a nation and inspires generations to fight for freedom. In this thrilling action adventure, "Russell Crowe and Ridley Scott are at their most entertaining since Gladiator" (Dan Jolin, Empire UK). Also starring Academy Award® winner Cate Blanchett.