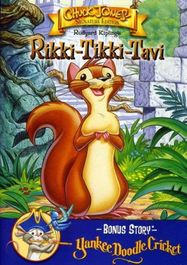 Deep in the heart of turn-of-the-century India, a young mongoose is adopted by a British family. "Every well-bred mongoose hopes to be a house mongoose someday," narrates Orson Welles - and indeed, bushy-tailed RIKKI-TIKKI-TAVI does just that (and more) in this exciting Rudyard Kipling classic. Protecting his "family" to the death, Rikki battles Nag and Nagaina - two hideously evil cobra snakes who want to kill the humans in order to safely hatch their eggs. Miles ahead of ordinary cartoon fare, RIKKI-TIKKI-TAVI is a very special animated film that will be a welcomed addition to any home video library.

In a career spanning over 60 years, Chuck Jones made more than 300 animated films, winning an Oscar as director, and in 1996 received an Honorary Oscar® for Lifetime Achievement. Among his many achievements was the establishment of his own production company. Chuck Jones Enterprises, through which he wrote, directed and produced the animated films presented on this DVD. We hope that you and your family will enjoy these very special animated classics.