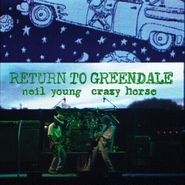 Neil Young's Greendale album with Crazy Horse is revisited on this new live record Return To Greendale, recorded at their 2003 Air Canada Centre concert in Toronto. A rock opera about the fictional seaside town of Greendale, CA, exploring themes of environmentalism, corruption, and anti-war sentimentalism, the album was the inspiration for a graphic novel of the same name in 2010. Here, the music and ideas are fully brought to life in the band's concert performance.