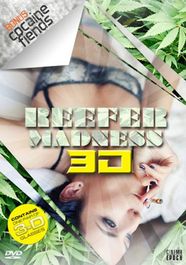 Indulge yourself for a night of vices, the cult classics REEFER MADNESS and COCAINE FIENDS in 3D. Hosted by the Luscious Lucinda! Includes one pair of 3D glasses.

REEFER MADNESS (originally made as Tell Your Children and sometimes titled as The Burning Question, Dope Addict, Doped Youth and Love Madness) is a 1936-1939 American propaganda exploitation film revolving around the melodramatic events that ensue when high school students are lured by pushers to try marijuana from a hit and run accident, to manslaughter, suicide, attempted rape, and descent into madness.

COCAINE FIENDS is a 1935 American exploitation film directed by William O'Connor. The film, starring Lois January, told the story of a woman called Jane Bradford, who gets involved with a drug dealer and becomes addicted to cocaine.