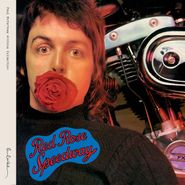 Red Rose Speedway, with its classic No. 1 hit “My Love,” makes its entry into Paul McCartney's Archive Collection with a splash: the deluxe version of the reissue is a 3CD/2DVD/1Blu-ray package. The DVDs and Blu-ray feature music videos, interviews and The James Paul McCartney TV Special; among other extras are unpublished photos by Linda McCartney and memorabilia from the story behind McCartney's proposed animated series The Bruce McMouse Show, such as character sketches and dialogue sheets. In a nod to its original double album concept, there are also numerous bonus tracks.