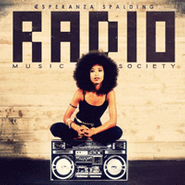 I’m won over by the cover of Wayne Shorter’s "Endangered Species," an oddball techno-fusion tune from the ’80s that nicely solidifies her approach. She’s got the chops and the smarts to deliver, probably over the long haul rather than the short.


Whatever you think of the Grammys, in 2011 they had the nice effect of introducing the world to the multitalented Esperanza Spalding, who won best new artist that year over the likes of Justin Bieber and has gone on to dazzle listeners with performances on the Oscars and late-night shows. Her much-anticipated Radio Music Society doesn’t disappoint, with its wily blend of jazz instrumentation and pop vocal. Opener “Radio Song” seems to comment on the 27-year-old’s rare place as a pop star in the jazz world, and her scatty delivery, sweet “la la” accompaniment and badass breakdown partway through sell a song about a song playing on the radio, getting its listener through traffic. It’s a perfect encapsulation of why Spalding works for fans of all sorts of music: She connects to listeners like a pop singer while retaining serious jazz chops. Similarly to-the-heart is “Cinammon Tree,” in which she ponders the feelings of a plant a la Björk over a lovely string accompaniment, while “Land of the Free” is a brief, organ-laden indictment of wrongful imprisonment. Spalding seemingly tackles any subject and sound she pleases, and given her skilled yet soft, inviting vocals (think a jazzy Diana Ross), along with her adept bass skills (check out the intro to “Endangered Species”) and accompaniment by a host of jazz musicians, some production work by Q-Tip and one awesome smooth jazz Michael Jackson cover (the Stevie Wonder-penned “I Can’t Help It”), Radio Music Society’s curious mix is an engaging listen throughout.