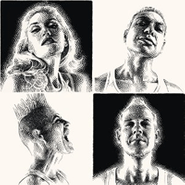 No Doubt have nothing left to prove on their sixth album, after a decade or so of toiling in obscurity, a decade of superstardom and a past few years of relative calm while frontwoman Gwen Stefani embarked on a successful solo career and had two children. So the fact that they hit back so hard on Push & Shove is a testament to the time No Doubt spent building their sound, the chemistry the band has built its dynamite live shows on and the sheer joy they have in making music. No Doubt were on the cusp of ’80s revivalism and dancehall appreciation, so it’s no surprise they stick to these guns on Push & Shove. “Settle Down” has a great laid-back dancehall vibe without any unwelcome desperate attempt to get back on the radio -- they know they’ll get there without pandering. However, they also could fit nicely between Nicki Minaj and Drake on pop/hip-hop radio with the big, pulsing “Looking Hot,” their 2010s radio calling card. Elsewhere, they indulge their ’80s pop and ska worshipping roots (after all, this is a band that started in the ’80s) on the Berlin-by-way-of-Gaga “One More Summer” and the too-fun, horn blasting title track. Some of the album’s mid-section gets bloated with digitized over-production, sounding best when Stefani is allowed to emote through the sound like on the power-ballad “Gravity,” featuring a welcome mature lyrical turn from Stefani as she sings of a relationship (or her band) with sobering gratitude: “We’re so lucky, still holding on.” She should know, luck has little to do with it -- the hard work No Doubt have put in shows on their sixth album, and fans should feel as lucky as Stefani does.