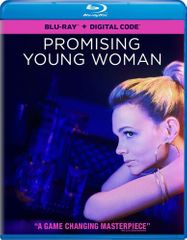 Everyone said Cassie (Mulligan) was a promising young woman...until a mysterious event abruptly derailed her future. But nothing in Cassie's life is what it appears to be: she's wickedly smart, tantalizingly cunning, and she's living a secret double life by night. Now, an unexpected encounter is about to give Cassie a chance to right the wrongs of the past in this thrilling and wildly entertaining story.

By turns darkly hilarious and heart-wrenching, the astonishing film is packed with daring and thought-provoking moments from beginning to end by writer-director Fennell delivering a "delicately-wrapped bonbon laced with arsenic" (Keaton Bell, VOGUE). From Academy Award®-winning production company FilmNation Entertainment and the filmmakers behind The King's Speech, Arrival and The Big Sick and alongside LuckyChap Entertainment producers Margot Robbie (I, Tonya, Dreamland), Tom Ackerley (Dreamland, Terminal) and Josey McNamara (Dreamland, Terminal) the "funny, sexy, smart and absolutely terrifying" (Kate Erbland, IndieWire) PROMISING YOUNG WOMAN is a must-own film with a profound message for all.