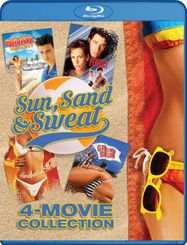 Jack and Ben check in at a posh Florida resort, planning to spend every hour in hot pursuit of babes. But their plans hit a major detour when they try to bed the wife of a conniving jewel thief. They'll have to outsmart him, a nasty security guard and an obnoxious jock if they're ever going to get a moment alone with the girl of their dreams!

When three middle-aged geezers move into a swinging beach house, they hire a young stud to teach them how to score with the local beauties.'80s band Vixen and hundreds of Southern California's hottest swimsuit models co-star in the legendary cult comedy.

Adam and Nelson are naive college students who have come to Fort Lauderdale to perform these rites of Spring Break. Due to a mix-up, the boys end up in the same room with a pair of experienced guys from New York who coach the boys on the finer points of seduction - with mixed results.

Based on a series of Rolling Stone articles by Aaron Latham, this romance was set in the world of L.A.'s hip fitness scene. Rolling Stone reporter Adam Lawrence (John Travolta) comes to L.A. to write a story about a prominent businessman who's been arrested for drug dealing (shades of the John DeLorean scandal). He's also decided to research a piece on the exercise fad and how health clubs have become the singles bars of the 80s. His boss (real-life Rolling Stone editor Jann Wenner as himself) OK's the project. At a club called The Sports Connection, an incognito Adam meets the regulars, including promiscuous Linda (Laraine Newman), airhead Sally (Marilu Henner) and aerobics instructor Jessie (Jamie Lee Curtis), a former Olympic swimmer. Adam and Jessie begin a romance, but it ends when she discovers that he's there to trash her and the club in print. Conflicted, Adam wrestles with publishing the story, but the final decision isn't his.