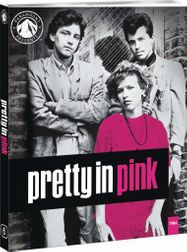 A newly remastered Blu-ray, from a 4K film transfer supervised by director Howard Deutch, Pretty in Pink looks prettier than ever. Teen sensations Molly Ringwald (Sixteen Candles, The Breakfast Club) and Andrew McCarthy (St. Elmo’s Fire) drew rave reviews for their starring performances in this hit love story produced and written by John Hughes (Ferris Bueller’s Day Off, Planes, Trains, and Automobiles ). Andie is a high school girl from the other side of town. Blane’s the wealthy heartthrob who asks her to the prom. But as fast as their romance builds, it’s threatened by the painful reality of peer pressure. From its bittersweet story to its hip New Wave soundtrack, the film features great supporting performances from Harry Dean Stanton, Jon Cryer, James Spader and Annie Potts.