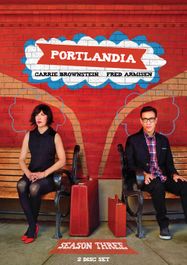 IFC and Executive Producer Lorne Michaels welcome you back to Portlandia with the complete third season of the Peabody Award-winning comedy starring Fred Armisen and Carrie Brownstein. In addition to your favorite faces and places from seasons one and two, you'll visit Peter and Nance's fledgling Bed & Breakfast; a Vegan restaurant with a fart patio; and meet Fred and Carrie's new roommate.