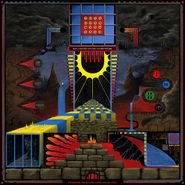 The physical release of King Gizzard & The Lizard Wizard's 12th studio album -- and the fourth of five albums recorded last year -- doesn't skimp on the experimentation, tone shifting or hypnotic arrangements. Take the 10+ minute opening track "Crumbling Castle" which exemplifies the trance-inducing, sermon-like storytelling that the band has been crafting over their career. The title track finds the band in gentler seas with flutes and airy synths that bring to mind King Crimson's softer concoctions, with a touch of OCD. The pulsating synths on sludge-y, math rocker "Deserted Dunes Welcome Weary Feet" are reminiscent of "On The Run" from Pink Floyd's Dark Side of the Moon, but rather than syncing this one up to The Wizard of Oz, try, perhaps, something on Adult Swim. Ingest this record with an open head space and some time to really dig into it.