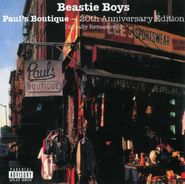 As with so many great works of art that are not fully appreciated at first, this sample-rich masterpiece was initially dismissed as too high in concept and too low in instant hit material, mainly because of the notable absence of Rick Rubin's crossover production values that had made the Beastie Boys' 1986 debut, Licensed To Ill, such a hit singles-packed release. But as the years progressed and the sheer sonic and lyrical brilliance of this album had a chance to register with all, this album rightfully got the props it deserved. With production assistance from the Dust Brothers and a richly diverse sound that incorporated funk, jazz, rock, punk, and obscure sound effects, Paul's Boutique essentially rescued the trio from ever being relegated to becoming a VH1 one-hit wonder novelty rap item. Instead it catapulted the Beasties to becoming respected, career artists in hip-hop and beyond. Rest In Power MCA.