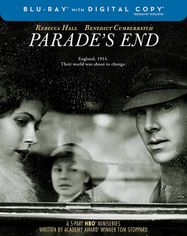 Based on four related novels by Ford Madox Ford published in the 1920s, the miniseries was adapted for the small screen by acclaimed playwright Tom Stoppard (Shakespeare in Love), who vividly captures the devastation of war and the end of Edwardian ideals, bridging the gap between feudal England and the dawn of modernism.

Set over a tumultuous ten-year period 100 years ago, Parade's End centers around honorable English aristocrat Christopher Tietjens (Cumberbatch), who puts principles first by marrying Sylvia (Hall), a pretty, manipulative socialite who gives birth to a child that may not be his. While enduring his new wife's whims and overt indiscretions, Tietjens finds himself captivated by a fearless young suffragette, Valentine Wannop (Clemens), but refuses to give in to their mutual passion or end his marriage to Sylvia. Experiencing war and the far-reaching changes to the English class system as well as being drawn to the possibility of a future where honor and passion might co-exist, Tietjens gradually lets go of the ties that bind him to the traditions of his privileged past.