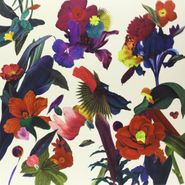 Washed Out's third album takes the poolside chillwave of Ernest Greene's previous releases and expands it into a psychedelic wonderland of sound. You can picture the paisley and swirling visuals of a song like "It All Feels Right" in its first bars, but Greene's songs aren't loaded with a generic '60s feel. They come to life with the intricate detail Greene slowly pours onto these songs like honey — "It All Feels Right" might be just a handful of chords and simple melody on the surface, but decayed samples, tremeloed vocals, bird chirps and hints of sitar make up a menagerie of sounds to tickle your ear. Songs like "Don't Give Up" return the hip-hop beats and lite funk bass to the mix. "Weightless" lives up to its name as slow-motion dream-pop in which emotions are suggested rather than felt directly, sounding a bit like an electronic version of a Julee Cruise song. The album pulls back into focus with "All I Know," whose jangling guitars and ascendant melodies carry the emotional uplift of U2 or recent M83 yet with Greene's traditional laidback stance, marking among Greene's best yet. Some of Paracosm gets a bit murky in its second half, but Greene is still an expert at pairing atmosphere with pop rooted in various eras and genres. Whether he's vibing '80s synth-funk, hippie-era sentiment or shoegazing solitude, Paracosm is miraculously seamless and enjoyable throughout.