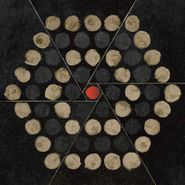 Orange County’s native sons Thrice made a career in the '00s by playing exactly the type of music their Warped Tour-worshipping constituents thrived on: emo/post-hardcore that blended the technical prowess of their forbearers with a newfound sense of catchiness in the form of radio-friendly earworms. Yet this is not the same band that sang countless yearning, angsty hooks over arpeggiated guitar riffs on The Artist in the Ambulance. Maybe it was the 5-year hiatus starting in 2011 that did it, but this version of Thrice is much different. For one, the band has gotten in touch with their new-wave side, undoubtedly finding common ground through hefty doses of Depeche Mode. The vocals are lower, gruffer -- a natural progression of aging, sure, but the tones and textures that comprise Palms are darker as well. Cold synthesizers color nearly every track while the guitar assault of old is paired back, and though Thrice are still a “rock” band through and through, electronica and industrial aren’t too far behind. Yet, despite the sonic makeover, one need only listen to the chorus of “The Grey” to realize that those yearning, shout-along earworms are still there. A refreshing update of the post-hardcore sound that dominated the aughts.