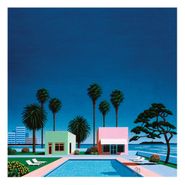 The good folks at Light In The Attic Records invite you on a journey to Japan during its booming '70s and '80s in which the economy was surpassed only by that of the United States, and its technological advancement coincided with a slick, precise and eclectic form of easy listening, known as city pop. While the style of music has had a devoted collector fan base, physical recordings have been mostly unavailable outside of its native turf. Pacific Breeze is an attempt to remedy its absence in the rest of the world with a thoughtfully curated sampling of its stylings and textures, which touch upon everything from groovy boogie and electronic pop to exotica. Pristine analog production is the main through-line of these varied gems, which are so tight in execution and punchy in tone, one can almost imagine them being created on an automotive assembly line. While there may be a kitschy appeal for some Western listeners, there's also an undeniable wealth of creativity and innovation being tapped into on these recordings that will certainly help illuminate this period of Japan's prolific musical history, as well as inspire a new generation of production-oriented musicians.