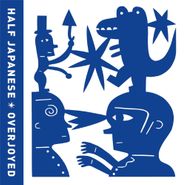 Half Japanese’s legacy as detuned-guitar weirdos that inspired legions of other important bands is more than solidified at this point. But thankfully, the band has decided to record a new album, their first in 13 years, to go along with their recently announced Neutral Milk Hotel tour. And let’s just say it’s far from a fiasco. Overjoyed is brilliant, teaming with the energy of a band half the age of the Fair brothers. “In its Pull” establishes the band’s core appeal of sing-spoken vocals over a straight-ahead rock beat and guitars that vacillate between Stones riffs and atonal fuckall chords. “Meant to Be That Way” sees the band engaging in squealing, No Wave-style guitar sounds, but they’re pretty reined in, used in the service of creating a potent post-punk groove. “Brave Enough” might be the band’s best pop song yet, full of jangling island guitars, bongo drums and lyrics like “Come on! Let’s do it!” Yet the whole thing is lovably strange, too, a special freak-pop gem that only Half Japanese could produce. That moment of accessibility speaks to how listenable Overjoyed is throughout, even while the band is spitting distorted vitriol into their mics (“Do It Nation”) or singing with only the faintest hint of a melody (“Shining Star”)—these songs are still hooky at their core and a lot of fun to listen to. There’s also a wonderful positive energy to the album that doesn’t feel forced. A song like “Overjoyed and Thankful” might be ironic, but it doesn’t really matter, as its torn-apart rock ‘n’ roll still brings a smile to your face. And “The Time Is Now” is irrepressibly life affirming and musically quite pretty, with shimmering, jazzy guitar lines. “Don’t ever get stuck with that stupid word ‘why’; I never have liked that word,” they sing nakedly on “The Time Is Now.” To borrow a line from the song, the long-awaited Overjoyed puts a few more rainbows in our blue sky.