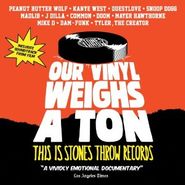 Peanut Butter Wolf’s Stones Throw Records has long been a home to avant-garde hip-hop, unclassifiable electronica and forward-thinking neo soul, so much so that the label has garnered its own documentary film, Our Vinyl Weighs a Ton. For the soundtrack, PB Wolf enlisted beat maestro Madlib to offer a number of previously unreleased tracks. The simply titled backing tracks (“Cue 1, 2, 3” etc.) are fascinating in their own right, allowing listeners to witness the kind of chewy retro-soul-inspired hip-hop collaborations Madlib has been associated with over the years in chrysalis form. Elsewhere, the soundtrack corrals tracks by some of Stones Throw’s brightest for rare and previously unreleased tracks, including a live cut from Dam-Funk (“Don’t Go Swag”), a track by the sorely missed J Dilla (“Lightworks”), songs by some of Stones Throw’s lesser-known yet still-excellent artists like Vex Ruffin and James Pants, and some undisputed classics (Madvillain’s timeless “All Caps”). This soundtrack gives just as clear of a message as the film it accompanies—Stones Throw kicks ass and always has.