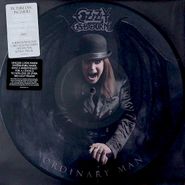 Seventy-one year old Ozzy Osbourne is, by any measure, definitively NOT an ordinary man. The title track of his 12th solo record certainly acknowledges this fact, turning lines like “I've been a bad guy, been higher than the blue sky” and “they tried to kill my rock and roll” from worn rock cliché to absolute edict when you consider who’s singing it. It’s not the only track on Ordinary Man that finds Ozzy in a contemplative mood, as power-ballad “Under the Graveyard” mines similar sonic (if not quite lyrical) territory, but the whole album was produced and played at a breakneck pace. With the whole album grounded by the super group rhythm section of Guns N Roses bassist Duff McKagan and Red Hot Chili Peppers drummer Chad Smith, it sounds absolutely gleeful as it rips through heavy metal numbers that regale Ozzy’s (mostly past-tense) wild life and “Prince of Darkness” reputation. So even though the coda to the aforementioned title track might claim “I don’t wanna die an ordinary man,” that was never much a concern for the living legend.