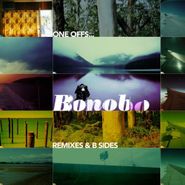 DJ and chilled-out music extraordinaire Bonobo’s first and only full-length album of remixes. 2002’s One Offs features the British producer adding his touch to songs by contemporaries such as Mechanical Me and Jon Kennedy (among others), while featuring said contemporaries remixing his own work and including a few unreleased trip-hop soundscapes for good measure. Limited edition 180-gram vinyl reissue.