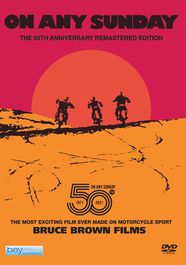 Celebrating the 50th Anniversary of the original motorcycle documentary masterpiece that feature Steve McQueen and riding legends Mert Lawwill, Malcom Smith, Dave Aldana, and many others, with music by the famed Dominic Frontiere, this is without a doubt the quintessential motorcycle film of all time. This special 50th Anniversary Edition has been digitally enhanced with a remixed and remastered Dolby Digital 5.1 soundtrack by Emmy Award Winner Chris Drozdowski.