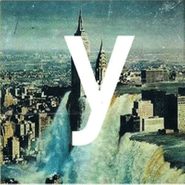 Blu’s NoYork! is a sublime slab of underground hip-hop, featuring skittery, active production from Flying Lotus and the heady rhymes of the ever-prolific Blu. “Doin’ Nothin” starts the album on a woozy note, coming out of a digital smoke haze of wobbling bass and clapped beats. “Everything OK” puts things into high-gear, speeding through an autobahn of synth lasers, cooed female vocals and Blu sounding chilled out at the center of it all, rapping about parties and girls and living while it all speeds past him like a blur. NoYork!’s headier tracks are no less beguiling, such as “SLNGBNGrs,” which unleashes a slew of MIDI sounds flowing on waves from ear to ear while Blu dolls out hood tales to the eerie effect of making it all seem like one big video game. Like its cover art suggests, Flying Lotus douses Blu’s urban rhymes in layers of glitched out noise, multitracked backup vocals and Blu’s own vocals cut up and strewn back over him like streamers. The guest spots all are welcome and imbue Blu and Flying Lotus’ sound world with more personality — Chop, Cherry Pop and Tiombelockhart bring attitude to the Woody Allen-reffing party jam “Annie Hall”; Jimetta Rose lends some necessary soulfulness to the album on “Spring Winter Summer Fall”; and El Prez, Pac Div, Uni, J*Davey, Tiron and Ayoamari make closer “Doin’ Something” a Wu-Tang-esque grimy crew jam. By balancing its human elements with dizzying production, NoYork! ends up an impactful and fascinating release.