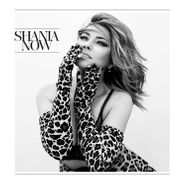 It's incredible to think that Shania Twain has been away for fifteen years. She was a mega celebrity in the '90s and was one of the major country stars (along with Garth Brooks) that successfully crossed over onto the pop charts with her seemingly inescapable hits. But the last decade-and-a-half hasn't been the kindest to her professionally or personally. Aside from some drastic life changes, including a divorce from her former writing partner, Robert John "Mutt" Lange, she also was suffering from dysphonia and Lyme disease, which nearly took away her famous voice. But after some soul searching and physical recovery, she's back to conquer the charts again with her new album, NOW. Though her voice has changed a little bit since her early days, it's still recognizably Shania Twain and she uses her powerful country twang with songs that now play around with modern pop production. Listening to "Life's About To Get Good," you wouldn't know there had been anything wrong this last decade-and-a-half. It's an absolutely joyous pop ballad that is a perfect celebration of life. The layers of happy sounds and bright-eyed optimism in her lyrics create a song that feels like the musical embodiment of happiness. It's hard not to listen to her life-affirming lyrics and smile to the melody. Shania Twain is back without fumbling for one second. NOW is a musical ray of sunshine for your cloudy day and captures how great life can really be.