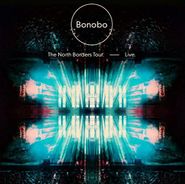 Since the release of The North Borders in March of 2013 Bonobo has been touring extensively with a 10-piece orchestra, outstanding visual effects and several accompanying feature vocalists. British DJ Simon Green has been touring with a live band on and off since 2004, however the spectacle has never been so thorough. The North Borders tour saw Bonobo in 30 different countries playing to over two million people in a little less than two years. It’s no wonder he created a live record out of this herculean task. The North Borders Tour: Live features a handpicked 15 song track list of performances from the UK, the Ukraine, and various radio sessions. Featured artists from his North Borders album Szjerdene, Andreya Triana, and Cornelia also return to perform more upbeat versions of the typically down tempo tracks.