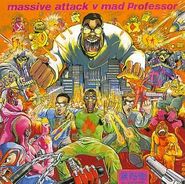 No Protection followed a year after the release of Protection and is a dub remix of the band's earlier LP as reworked by Mad Professor. Massive Attack had initially contacted the London-based dub producer to remix one song; eventually the project turned into a full-on rethink of the album, yielding a druggier, reverb-heavy, more instrumental take on its predecessor.